“I'm certain this information is the key to ending all the suffering in the world.”

The World Transformation Movement Colombia Centre was established by Carlos Cruz Blanco to bring Australian biologist Jeremy Griffith’s world-transforming scientific explanation of the human condition, and its extraordinary redeeming, reconciling and rehabilitating insights, to the world’s Spanish-speaking population—over 600 million people across the globe!

“I want to make this amazing breakthrough available to as many people as possible, not only in my home country Colombia, but in every Spanish-speaking country in the world—because through all the information that is freely available at HumanCondition.com, we will definitely change our perspective on how we behave. We will learn why we are not as bad as we are made to believe. It’s critically important that people from my country, and all countries in the Spanish-speaking world, are exposed to this great material.” Carlos Cruz Blanco

Carlos Cruz Blanco is a chemical engineer and Research & Development scientist. He obtained his engineering degree from National University in Colombia and two Master’s, in Materials Science and Materials Engineering, from Queen Mary University in London. Carlos speaks Spanish, English and is learning German.

Download this transcript as an A4 or US Letter PDF

My name is Carlos Fernando Cruz Blanco and I am so happy to be starting the WTM Centre in Colombia. I’m originally from Colombia, South America—born in the capital, Bogotá. I am 49 years old.

My background: I studied chemical engineering in Colombia and in 2001 decided to ‘cross the pond’, as they say, and I ended up in London. I first came to learn the language. My goal was to do a postgraduate course and finally I did a couple of Master’s degrees. I managed to stay in the country and now have a British passport. I’ve been working as a scientist since 2012; my present title is a Research & Development Scientist.

I have always been very curious about things; at some point in my life, I went between different religions, trying to find the ‘one’. I became a ‘born again’ Christian in 2010 and that’s the religion I try to practice now, and I’m happy with it. But I have always been open and curious about new ideas, new things, things that can enrich you.

The story with the WTM began, believe it or not, with Instagram [advertisements]. I started getting these amazing pictures of Jeremy Griffith’s book FREEDOM, with amazing backgrounds, normally nice landscapes. The ads then featured quotes of very important people, historical figures, and then even cartoons criticising certain things about the world as we know it. And those things started to resonate so much that I was looking at the cover of the book in these pictures and I was like: “What is that? What is that?” I don’t know at what point I said, ‘Okay let’s check it online, this FREEDOM book’, but I think that’s how it started.

Then I discovered the website. The first thing I did was download Transform Your Life And Save The World [TYL], the little review book [that serves as an introduction to Jeremy’s work]. It was free and was easy to read. And then I discovered that TYL presents addresses made at the launch of FREEDOM in London [at the Royal Geographical Society in 2016], so I then downloaded the PDF of that main book, FREEDOM. I love my tablet and I have lots of books on it, but when I really, really find a book that I really like, there’s nothing like the book in this [hardcopy] format. So I bought the book from Amazon and started reading it; it’s a book that you go forwards and backwards with.

But it all started with Instagram. I had never heard before of the WTM, of the work of Jeremy Griffith; I was completely ignorant about it. So since then it was just like this discovery. Then on the website I started looking at the videos, and continued my learning of all the material.

The information has greatly helped me personally, because of my background; I come from Colombia, which everybody knows is a country that unfortunately has been involved with violence for most of its history. And there were many, many examples from when I was a kid, a teenager, to my mid-to-late-20s when I left the country, of people doing very bad things. And I always thought, how come we are so capable of doing such horrific things that at some point they became a day to day event? At the same time my country has many, many good people doing very great things, and it was that contrast that was always with me, asking, almost “God, how come we can do good, and at the same time do some things so bad?”

So when I started reading the book and I realised what it was about, that it was trying to find the explanation of why humans are capable of both extremes, sometimes being very lovable, doing great, amazing and heroic things, and at the same time, history, not only in my country but in many countries, showing the horrors of war, for example. That was for me the key. That was when I really got interested in the information, when I really said, ‘Oh wow!’. I mean it’s fantastic that this [paradox] can be answered from a biological scientific point of view. [See Video/Freedom Essay 3 for Jeremy Griffith’s explanation of the human condition.]

As I just mentioned, I profess to follow a religion, but I also have a scientific mind. That’s how I am, I’m a scientist and I am religious, but I think FREEDOM goes beyond [both realms] in the sense that you can be critical, analytical and ‘get’ the understanding. For me that’s also important; I hope a book like FREEDOM will connect with people who think, “Oh, if you’re going to talk to me about religion, I’m not interested.” I do believe that it’s coming from the perspective that it is the product of research, not from dogma—not from something that we must ‘just’ learn. No, it is results that have been proven and tested—[it reflects] the scientific method. I think that’s the key, and for me that’s the good strength about the material—it can reach people who are not interested in other sort of information.

And to have those two connections [science and religion] explained in a more scientific way, and to explain why, finally, we are the way that we are, giving hope at the same time, is what has helped me the most to understand my own failures as a person. And to see the people around me when we are in different situations and see how we react—I say ‘we’ because I also react in the same way sometimes. Now that I have a little bit of understanding, thanks to the book and thanks to the videos and all the information that I have seen, it has helped me to at least find more peace, to be more calm and to have more hope, especially over the things that only opening our eyes can help.

The reason I would like to open the WTM Centre in Colombia is to make this amazing information that is contained in this book available to as many people as possible, not only in my home country Colombia, but any Spanish-speaking country in the world, because through its pages and through the website, and all that information that is already freely available, we will change definitely our perspective over how we behave. We will learn why we are not as bad as we are made to believe that we are. And I think it’s important that people from my country, and all countries in the Spanish-speaking world, are exposed to this great material. That’s why we have started translating some of the explanatory, complimentary material that is available on the website—and hopefully we will start soon with translating this amazing book, FREEDOM, so everyone can start reading it and start thinking about it. It’s definitely not an easy read [it is profound and can be confronting]. It’s not an easy translation either! But if I can say, it’s so important that everyone at least has a look, try to see what the book is explaining; they have to see inside himself or herself how things can be approached from a different perspective. Why conflict is not the only option if we know what created it in the first place. That’s one of the very first takeaways that I took from the book.

So the idea is to make it grow, the movement grow. There are 600 million Spanish speakers, if I’m not wrong, around the world. So the more people that connect to the information presented, the better for the whole world.

“The more people that connect to this information, the better the whole world will be!”

MUST, MUST WATCH: Craig Conway, the acclaimed British actor, writer, producer and broadcaster — and the founder of WTM North East England Centre — has brought all his skills to bear to produce the ideal introduction to Jeremy Griffith’s explanation of the human condition in this absolutely astonishing, world-changing and world-saving interview with Jeremy. It’s called ‘THE’ Interview because in it Jeremy gives such a concise and accessible summary of his world-saving explanation of the human condition that it’s nothing less than the most important interview of all time! 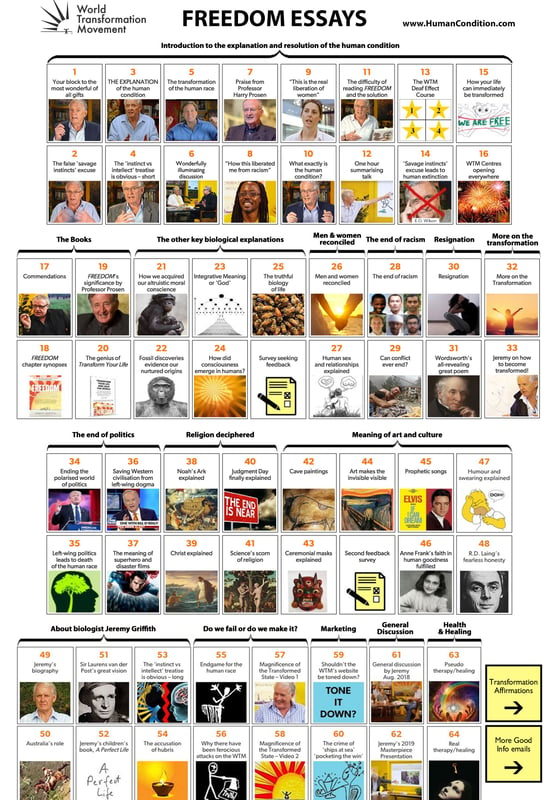 This series was developed to help people access the fabulous new transformed world that opens up for all humans now that understanding of the human condition has been found. As these essays cover all the main subjects in FREEDOM: The End Of The Human Condition, they provide an easy way to read FREEDOM in wonderfully illustrated bite-sized portions. The first 4 essays are particularly important and helpful, and are the key to understanding and solving everything!

The full Freedom Essay Series is available in English on the main WTM website at HumanCondition.com.

The Spanish translations of some essays are available on the Spanish language version (ES) of this page.

Alongside the original WTM Centre in Sydney, Australia, World Transformation Movement Centres are being established around the world to help bring to everyone the now desperately needed all-relieving and all-explaining biological understanding of the underlying issue in all of human life of our troubled human condition.

Visit the WTM’s Transformation page to learn more about the formation of these Centres. You can access the following examples of WTM Centre websites by clicking on their images below.

Subscribe to our YouTube channel and receive two or more videos each week. These videos will include enthralling, bite-sized samples of the explanation of the human condition, and also descriptions and examples of the transformation that is now possible for all our lives.